SINGAPORE, HAVING A NEW FAMILY IN THE FINED COUNTRY

I am 29 years old and this is my first time traveling overseas? Yeah, shame on me! But my previous job didn't give me a lot of time off and I was a little bit busy traveling inside my country, Indonesia, so here I am traveling overseas for the first time. But better late than never, right?! J

So after a hectic week trying to arrange a trip and finish the job at my office, here I am standing at Changi International Airport with my best friend, Irma (her full name is Nur Hidayah), and my co-worker, Ichi (full name Mirah Kharisma Ayu Pratiwi), while drizzle falls outside. I feel a little confused because this is the first time I have seen so many information boards in English in a day. LOL. 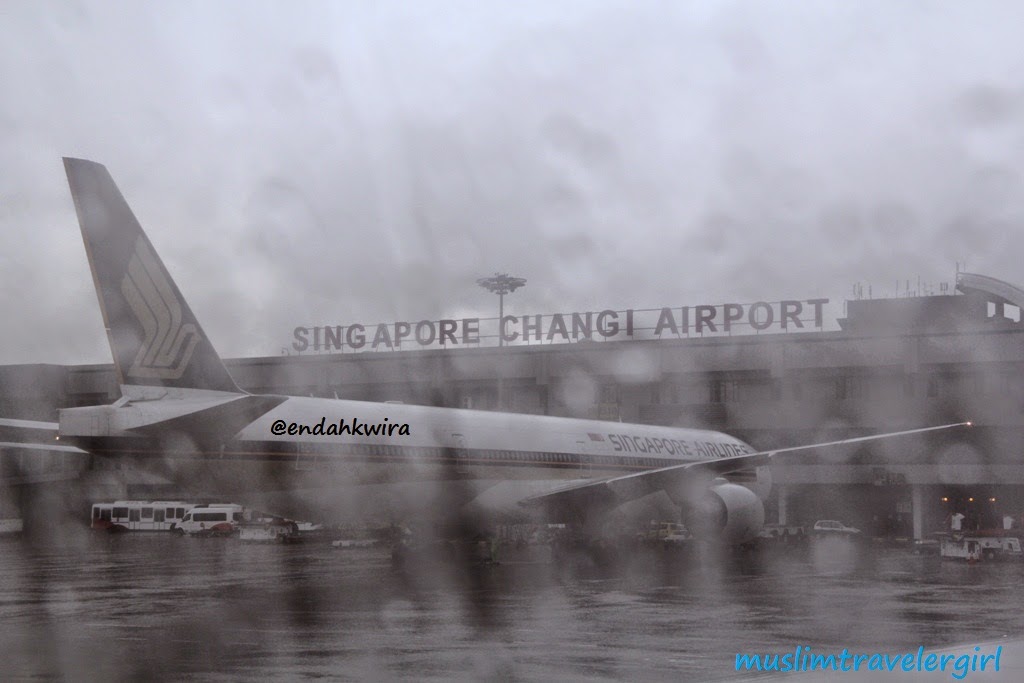 I sent a message to my new friend, Hussien, to tell him that we already arrived in Singapore and were on our way to his place. Unfortunately, Ichi had a different itinerary because she had to meet her father who took a different flight from us, for a medical checkup in Singapore. So Irma and I said goodbye to Ichifor now, and made a promise to meet her the next day, somewhere in Singapore. In 1 hour, we arrived at Hussien’s apartment and got a very warm welcome from his family. I met Hussien through the couchsurfing website where he offered a couch for me and my friend. Hussien were a Singapore citizen

After a lunch and a quick introduction, Hussien and his wife, Noer, took us for a tour of the city. First destination was the Ministry of Marriage. Why? Because Hussien and Noer found out that we were both single, and there's a myth for single people at the Ministry of Marriage. If we take a picture in one special spot right there, we will meet our soul mates soon. I'll pray to God to make it come true.
After that I asked Hussien to take us to Singapore’s National Museum. This museum was at the top of my list because I could learn about the history of that country in 1 day. Too bad, we arrived at the museum too late. We could still enter the museum, but most of the chambers that had special shows were closed. So we were only able to see the architecture inside the building and take a few shots.


From the museum, we headed to the Singapore Flyer. We didn't intend to take a ride on that giant Ferris wheel. We just wanted to see it and walk around that neighborhood. We circled this area and played with a small fountain.

After that, we headed to Merlion Park. This was my friend’s request. She said that going to Singapore would not be complete if we didn’t visit this signature statue of Singapore. So here we were, posing and taking pictures around that lion statue. It was Saturday and there was a crowd around that area. We had to circle that area just to get a perfect angle for my camera.

We were walking around and enjoying the vibe near the river. Not far from Merlion Park, there is an art building called Esplanade. From the outside, this building looks like a Durian fruit. We took a quick look around before going to another place.

Following on from here, the next destination was the Sultan Mosque. But before that, we made a quick stop at the Cenotaph "Our Glorious Dead". It is a monument to the victims of World War I and World War II. The granite monument was unveiled by the Prince of Wales, Edward VIII on March 31, 1922.

Too many places to see in a few hours made my stomach scream for food. So we stopped at Zam-Zam, an Indian restaurant at Pinang road. Hussien says that this is one of the best martabak restaurants in Singapore. Martabak is a stuffed pancake, or pan-fried bread. After eating a lot of that dish, I thought we would get back home. But my new friends decided to take us to one more place, Vivo Mall City, the biggest mall in Singapore.

This mall is not an ordinary mall. Inside this building, there is a connecting hall to wharves to Batam Island, Indonesia. There is even an immigration desk at that hall. Wow! What an interesting concept, while waiting to get across to Indonesia, you could walk around, do some window shopping, or buy something in this mall.

The next day, I got a surprise gift from my friend. The night before, he had asked me which place I wanted to visit today, so I mentioned Jurong Bird Park, or Singapore zoo because I love animals. So this morning he gave us 2 tickets to go to the Singapore zoo, for free! Wow! Awesome! Thank you so much, pal!

So he drove us to Singapore Zoo and promised to pick up us around lunch time. The first time we entered the zoo, I was mesmerized by how clean and neat this place is. We were walking around while taking some picture when I remembered that I had forgotten to tell my mother about this trip. So, I sat on a bench, took a rest and called my mother to let her know where I was.

After a quick rest and circling the zoo again, at 1pm, my friend picked us up to have lunch at his house and then he continued to take us to see more of the city. He took us to Bugis Juction in Bugis street, one of the famous places for shopping in Singapore. Yes! It’s time to get some souvenirs for my family and friends.

Actually, I don’t really like shopping. Usually when I go to a place like this, it’s only just for sightseeing. But there are a couple of friends who know about my trip so I had to buy souvenirs for them.

When we arrived at Bugis street, Ichi sent me a message that she wanted to join us. So I texted her where we were, and half an hour later she joined us to buy some souvenirs here. I also introduced her to Hussien, Noer and their daughter, Sharifah.

After that, I wanted to see the beach, because I was curious whether Singapore had beaches or not. *Of course they have, it’s an island :P *. We arrived at East Coast around 6pm, and the sun had almost set. The beach was so nice, clean and neat. Love that. Hope some of the beaches in Indonesia would look like this too. It’s a drizzling but we love that. We were just enjoying and playing around the beach.

Ten minutes later, the drizzling stopped and a rainbow appeared in the horizon at the same time the sun was setting. What a beautiful sigh. We took some pictures when the light poles around the beach were switched on. What a lovely place, calm and quiet.

We moved away from the beach area and drove Ichi back to her hotel. Actually, we were ready to get back home too when I remembered that this was our last night in Singapore and I wanted to have some pictures of the city at night. So I asked Hussien, to take me there.

It was drizzling again but I really wanted this picture so here I am standing on the road at Esplanade building. I couldn’t take many pictures, or for too long because my camera battery was very low and my memory card was almost full, only 25 frames left!. But right before my camera “died” I already got what I wanted. Feeling happy, hungry and chilly because of the rain, my friends drove us back home. Before we got home, we circled around Singapore, especially at Geylang Road. Why Geylang? Because a few minutes before, I had told Hussien that I had heard a rumor that Geylang was a prostitute area. He said yes, and drove us to take a look around.

If there is any inspection by a Singapore officer, they will run away. If they are caught by the officer, they will end up in jail. Really? I don’t know that prostitutes need some kind of license to work in Singapore. After circling around and making some jokes about it, we arrived at home at 3 am, after having a very late dinner at midnight.

The next day Irma and I decided to take a short trip around Singapore using their public transportation, MRT and Bus. We went to the CBD, Central Business District, looking around and wandering among those tall building. I felt like an elf in here.

Singapore is famous for being a very clean and well organized country. I remember Noer told us, when we were passing through an apartment construction site yesterday, that if any company wants to make a project that requires them to dig the soil, they have to make sure that they will not produce any dirt at all, not even dust.

The government will have a routine inspection to check around that project. If they find any dirt, they will get a warning statement. If they ignore that 3 times, the government will shut it down, hand it over to another company and that company will be sued and fined.

Wow! What strict rules! But the results, Singapore is very clean, neat and in order. Wish Indonesia could be clean and neat like Singapore.

Too bad my trip to Singapore was way too short, only 3D2N. At 3pm, Irma and I had to say goodbye to Hussien and his lovely family. Thank you so much for accepting us and for a lovely new friendship! Now, we had new family in Singapore! (EKW)
Posted by Endah Kurnia Wirawati