MT. SEMERU TRIP: HIKING TO THE HIGHEST PEAK IN JAVA ISLAND WITH 13 BOYS

Planning a trip to Mt. Semeru was not easy. Lots of obstacles and problems plagued us, but finally 13 guys and I were going to the highest peak on Java island. We went to Malang, East Java by Matarmaja train. This is an economy train, and being on it for almost 18 hours makes the body stiff. We were so bored because this train is also very slow.

After arriving at the Malang train station, we then continued to Tumpang, a village in the Semeru valley. We had a woman named Rani help us rent a jeep. We stayed a few hours at her house while waiting for the jeep to come. After that, we continued the journey by Jeep to the climbing office Ranu Pani. The jeep was pretty small for 14 people and 13 big bag packs. But considering that's the only vehicle that exists in this area so yeah..whatever!

After a 2 hour jeep ride, we arrived at RanuPani. After signing up at the BromoTengger Semeru National Park office, we immediately began to hike at 3pm, accompanied by heavy rain clouds. Approximately 1 1/2 hours later, it started to rain, and we immediately took a break at the first shelter.

After nearly 2 hours, the rain wouldn’t stop. So we finally decided to continue walking the road to our destination for camping, the Ranu Kumbolo shelter. This shelter is famous because it's a lake. At 11 pm we arrived at Ranu Kumbolo Lake. After building 3 tents, cooking and eating, we all fell asleep at 3 am! 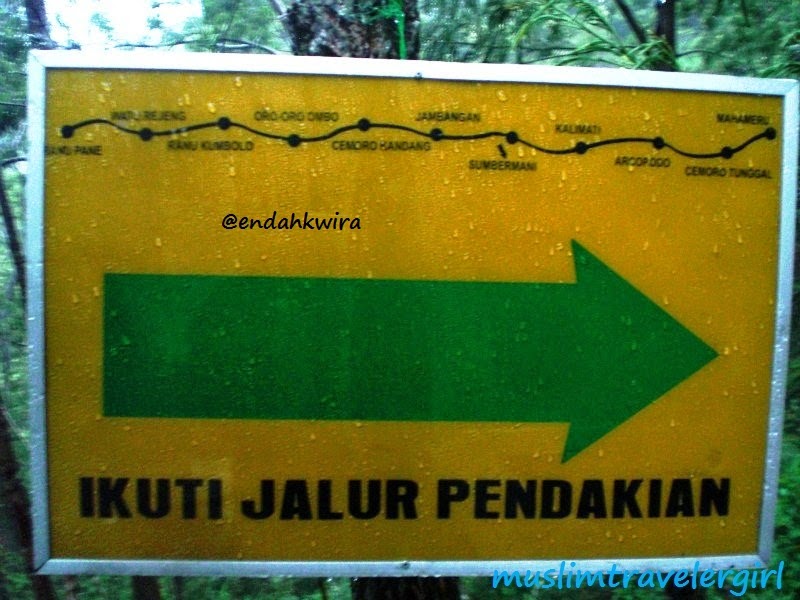 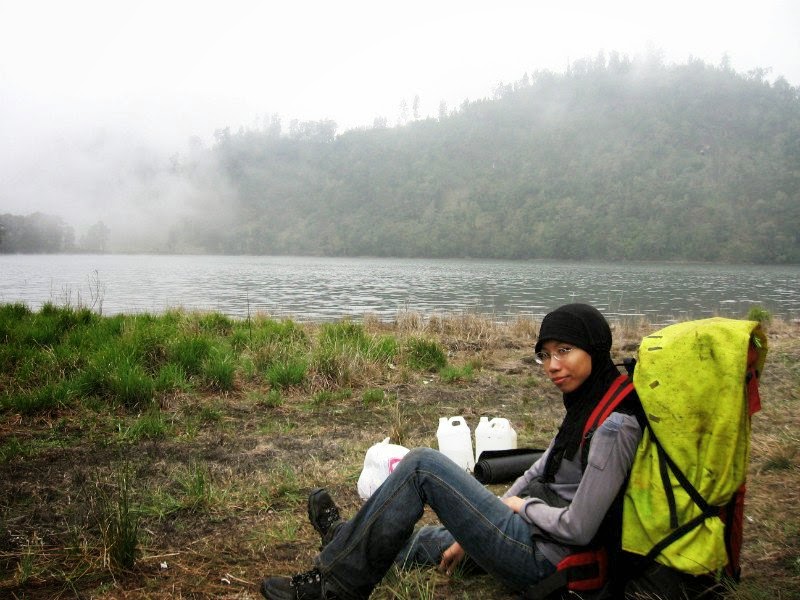 At 6 am, I got up and boiled some water for heat because it was so cold. Half an hour later, the rest of the guys began to wake up and started the narcissism part: take a lot of pictures around the lake. Since I am the only girl in the group, they gave me the job of cook. That's not fair since I also want to take some photographs too. 😞

About 11 o'clock we started our journey to the next shelter, Kali Mati. After only walking for about 30 minutes, suddenly it began to rain again. There was a lot of rain that day. We stopped for a little while, waiting for the rain to stop but it kept coming. By 12.30 we decided to go ahead and continue all the way to the Kali Mati Shelter even though it was still pouring.

It was very cold, and our bagpacks became heavier because of the rain. But we didn't give up. We still continued to walk. Lucky for us, the track was all downhill. Around 4 pm, we arrived at the Kali Mati shelter. Everyone started changing their wet clothes with dry and clean ones, including me. We had to sleep earlier tonight because we had to get up at 11pm to hike to the top.

Right at midnight, we all started to hike to reach Mahameru, the name of the peak of Mt. Semeru. Together with us, were a couple of tourists from Malaysia and Singapore. The track from Kali Mati shelter to Arcopodo Shelter is dominated by a solid ground with a slightly uphill track.
After the Arcopodo shelter, the track changes to gritty or sandy, and it sharply inclines. Actually this is the shortest track, only 3 km to the top, but it is the most distressing portion. The sand was really loose, so even if we took a long step, the track started crumbling, forcing you to take a smaller step. So we had to walk about 4 to 5 hours to get to Mahameru peak.

I arrived at the peak first and took a break while waiting for the others to arrive. There was a crater that was constantly erupting and ejecting volcanic dust every 15-45 minutes. So I had to carry an umbrella to protect my face from the ashes. The dust began when we left the Arcopodo shelter. So from that shelter, I had to walk with a flashlight in my right hand and an umbrella in my left. 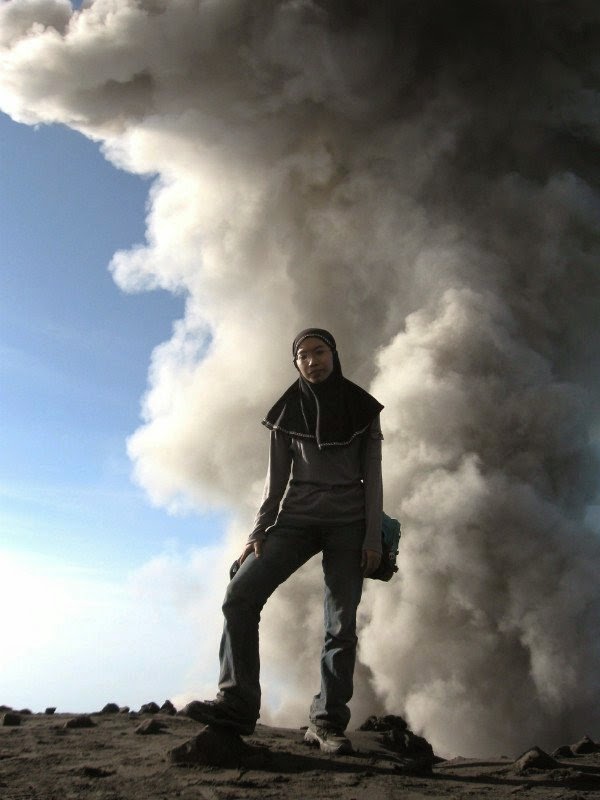 About 15 minutes later, my "big brother" Lebon arrived grumbling about one guy that was really really slow. He told me that the guy was walking for 5 minutes, then sleeping for 10 on the track. So he was pissed off at him. Lebon was part of the sweeper team which means that he has to be the last person, checking that none of the team members are left behind.

Lebon was so upset that he threw a small stone at that guy and yelled at him that we would not come down through that track again. Luckily it didn't hit him and of course it was a lie. We had to come down through that track again because we left all of our bagpacks at the Kali Mati shelter. Eventually, that guy named Encek, finally arrived at the top. After a quick break, we started a flag-raising ceremony and waved our national flag at the top.

We took some last photos with the crater as the background, and while it was "coughing" when suddenly the crater had a bigger eruption and ejected far more material than the previous one. Lebon took our last pictures at the top and we started running down from the peak. We were afraid that these ones could contain toxic gases. 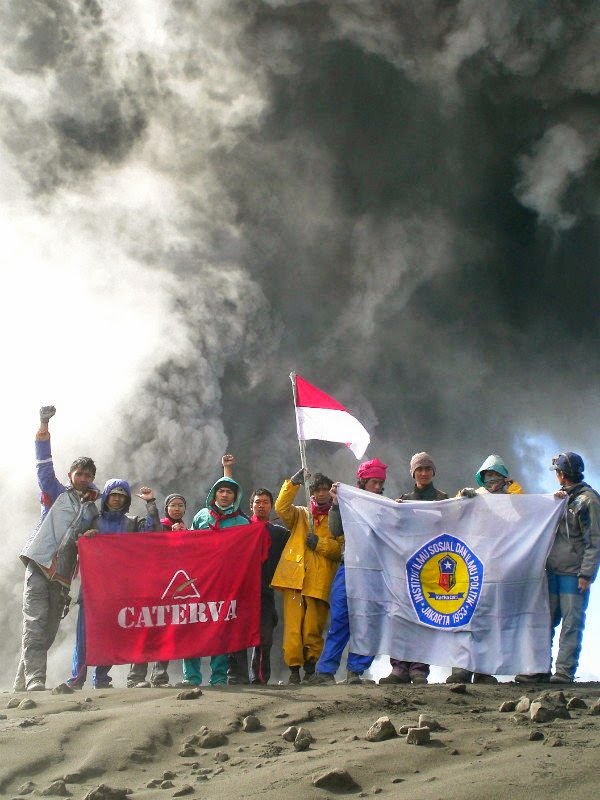 Walking down from the top of Kali Mati shelter, only took 2 hours. Compared with the time we spent walking up to the top which was 6 hours. That gritty track is far more helpful when going down, than going up.

When we arrived at Kali Mati shelter, I was not feeling well at all. I had to sit down in the corner of the shelter with my bagpack and sleep. Before that, I had already told 2 of my friends to cook for now, because I really needed to sleep. Two hours later, my friend woke me up to eat because he had already finished cooking. When I touched my forehead, I was shocked by my own body temperature. I had a high fever! Before I touched my head with my hand, my handswere cold, but after touching my own forehead for 1 minute, my hand become hot. Maybe it was because for the past 2 days I had been walking through the rain almost all day.

Even though I was sick, I didn't tell my friends that I had a fever, because we were all are carrying big bagpacks, and mine was the lightest. I did not want to give them more trouble remembering it’s really rare that 13 guys would want to go hiking with a girl. So after I ate, I took some medicine for the fever and headache, and also some vitamin. I asked them to wait for another 30 minutes, enough time for the medicine to work inside my body. It worked and my fever healed a little bit, but my body felt limp.

So we continued our journey from Kali Mati to RanuKumbolo. At first, around Kali Mati, it was foggy. But after we entered a small forest, the fog disappeared and the sun was shining. I was happy seeing the sun because that meant my fever would heal faster. Since I was kid, I don’t know why, I have a strange immune system. Everytime I get a fever, I rarely take medicine. Just 1 hour sun bathing, and the fever will go away, and it has happened a couple of times.


After we all got out from the small forest, we took a break near the pasture. I stayed under direct sunlight, and slept for 10 minutes while my friends were busy taking pictures everywhere. When I woke up, my fever was healed and I felt strong again, not feeling limp anymore. That's good!

We continued walking again and passed through a beautiful flower field at Oro-Oro Ombo field. That was strange! Yesterday when we passed through this field, there were no flowers at all. Only grass, tall grass! But now, it's covered with beautiful yellow wild flowers. Awesome!


We took some pictures in here while mesmerized by its beauty. After that, we continued walking and arrived at Ranu Kumbolo shelter at 5.30pm. We were so tired and started to take a break. Me? Like usual, cooking dinner for them. But this time, I wasn’t upset because I got help from 4 guys. Thank you! Feeling full and tired, we all fell asleep inside this big shelter. Have a nice dream, everyone!

5 o'clock in the morning I was already up. All the guys were still sleeping so I took that time to walk around the lake, take some pictures, and admire its beauty. After enjoying Ranu Kumbolo Lake briefly, as usual I had to cook again. All the guys woke up and started swimming in the lake despite a “no swimming in the lake” rule. Aarggh!! ... So jealous!! I also want to swim, too.. 😞. Come on guys, give me a break!


But 2 of the guys came to me, after swimming of course, and asked me if I needed help cooking. So I said “Yes! Of course I need help! How long do you think will it take to cook for 14 people if I have to do it on my own?” They just smiled and then helped me cook some meals. :D

The next morning, at 7 am, we rode a jeep back to Tumpang village. We cleaned up and packed everything. At 12.00 we set off toward the Malang train station. We took the very slow economy train, going back to Jakarta, the very crowded capital of Indonesia. But, the memories were impressive, and I promised myself I will get there someday to enjoy the beauty of nature, again and again. (EKW) 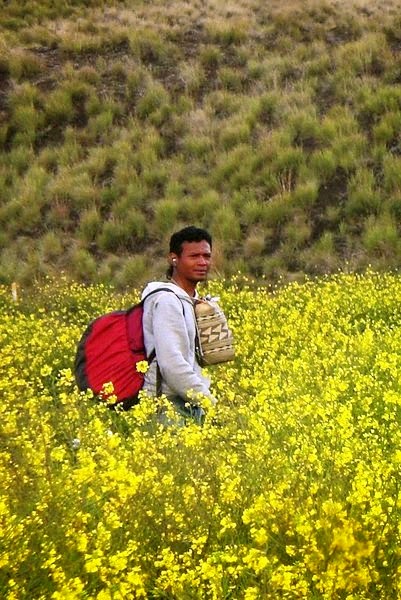 Dedicated to Iswayhudi a.k.a Lebon (7 January 19… – 3 March 2012)
Thank you for teaching me how to become a good hiker and enjoy nature without limitation. He died in his bed because of lung problems