2 years ago I had the opportunity to visit one of the islands in the province of Lampung, Pisang island. Pisang island was placed on the districts of Pesisir Barat, Lampung province

On this island, I had a chance to stay and listen to the story one of the resident. Mr Tuzakki is a clove farmers and fisherman living on this island, with an area of ​​half a hectare orchard, he has 400 clove tree, aged between 5 and 10 years. 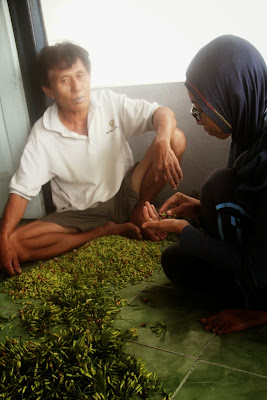 He said the clove plants on this island began to be cultivated since 15 years ago. But at that time, the numbers of clove tree was only a few, not as many as it is now. Seeds plants on the island is probably derived from Bengkulu or Padang. "Because the first people who lived here come from Padang," said Mr Tuzakki while separating the stalks and clove in the backyard of his stall with a friend.

This afternoon Mr. Tuzakki carries almost 2 kilos of cloves from a single tree. "Today I'm not be able to reap much cloves because the rain started from early morning. I only had time to harvest from a few trees, My clothes already wet and I feels so cold so I went home" He said with a smile on his old face.


In the market of Krui, 1 kilogram of cloves worthed IDR 135K. "Those price were dropped, usually about IDR 150K, minimum, sometimes above it".

Cloves are not only taken by its flower. Clove stem still could be sold for about IDR 10K per kilo. "It's cheap but it's okay". Everyday, like most people in this island, Mr. Tuzakki working as a fisherman. But during this rainy season, when he could not go to the ocean because of high winds and wave, he spends most of his time to pluck cloves from his garden.
Before the clove could be sell, it is first must be dried in the sun for 3 days. "But if the rain continues as it is now, it could take up to 10 days, even more" he said.

Cloves at Pisang island is often called as sea clove in Krui market. "Cloves here had much better quality than the clove that came from the mainland over there because there is no pest here". The clove on his garden in one of the areas in Pesisir Barat district mainland was not as expensive as the price of this sea clove. "On the garden from the mainland, I have to do pest control for caterpillars or worms at least once a month".

In the cluster islands with white sand beach, there is a beautiful, and exotic spices of clove, Those spice was helping the economies most of the Pisang island population. (EKW)